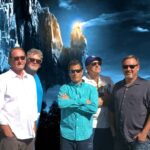 In mid 2000’s dSb made the transition to Classic Rock dance music spanning the 60’s, 70’s, 80’s, & 90’s. This new direction enabled the band to reach a wider demographic than ever.

We have shared the stage with many great performers synonymous with classic rock including The Animals, Johnny Rivers, Dave Mason, The Tubes, America, The Lovin’ Spoonful, Fabulous Thunderbirds, The Zombies, The Lt. Dan Band, some of whom are inductees into The Rock n’ Roll Hall Of Fame.