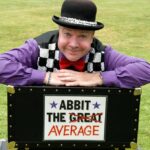 As one of the most requested comedy acts in Southern California, the Comedy Magic & Juggling Variety Show presented by Abbit The Average is a clean, high-energy, something-for-everyone performance with wall-to-wall laughs and loaded with audience participation. Along with wit that’s as fast as his hands, show highlights include prop comedy, slow-motion juggling and an illusion that makes his head grow right before your eyes. If desired, shows can be customized.

When not on stage, Abbit The Average performs as a Mobile Mirth & Mischief Maker, a one-of-a-kind strolling performer who combines hilarious physical and prop comedy with magic, juggling and non-stop shtick. It’s unscripted, interactive and ideal for just about any event you can think of. It’s like having five performers in one so you know it’s an incredible value! Doing a theme? Abbit can adapt both his costume and character to fit right in.

Speaking of characters….Jeff Abbit also does strolling entertainment as Austin Powers, Charlie Chaplin and Harpo Marx. Although those last two are silent characters, Abbit will leave your guests speechless, too! Abbit The Average is a member of the Int’l Brotherhood of Magicians, Int’l Jugglers Assn. and he’s a proud member of COSTCO! He has performed at the world-famous Magic Castle in Hollywood and the not-so-famous Steinberg bar mitzvah in Irvine.